﻿﻿ Shitespace - War Of Terror
Tributes
Contact Us
War Of Terror
pooclub
Perhaps the direst form of poetry ever to plague the English language is war poetry. For some reason, war always brings out the worst in poets, and it is always the innocent who have to suffer the barrage of drivel that these doom-mongering composers generate. And since we specialise in the idiom of tortuously dreadful poetry, the events following the September the Eleventh goings on provide us with prime material for boring the tits off anyone dumb enough to read such guff.

The initial attack on Afghanistan prompted this wave of banal tripe.

The Young And The Brave
Kate

They march like sacrificial lambs,
Towards their slaughter field,
With heavy weapons in their hands,
That they will ne'er yield.
The boyish blush has paled and froze,
The eyes that danced now die,
The smell of death creeps up their nose,
Where once was smell of pie.

Their ragged boots, ill kept and torn,
Now barely cover feet,
Their gaunt expressions, lost, folorn,
With death they each must meet,
With silent prayers they shed a tear,
And arm themselves for combat,
And brace themselves for pain and fear,
As they fight against the wombats.

The wombats come! They come!
Oh Lord! Our men cannot withstand,
The evil in the wombats' hearts,
Our men fall where they stand,
No weapon does the wombat need,
No guns or tanks, alas,
Just a burrow, nice and deep,
And perhaps some nice fresh grass.

Our men all fall, doomed youth, they fall!
Upon the fields of blood,
No mother here to heed their call,
At home their tears will flood.
A waste of life, these thankless wars,
The young and brave fall quick,
While wombats breed like rampant whores,
It really makes me sick.

I used to have two arms, two legs
I had amazing tits
I also had a lovely ass
and lots of other bits

I used to have a lot of friends,
and family, nephews and nieces
but now the war has come amd gone
we're all in little pieces 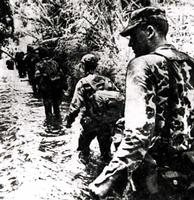 The first casualty of war is poetry.

Onward boys, time to go forth
We're marching into glory.
Show the world what we are worth
In one triumphant story.
Freedom lies within our hands
We're here to save the world
And all will see across the lands
Our banners be unfurled.

Onward boys, it's do or dare
Do not fear for your lives
Back home the postman will take care
Of your girlfriends and your wives.
Think of those you've left behind
Now you are at the front
And never mind that won't find
The pleasures of a cunt.

Onward boys, grab that spade
Got to dig that trench.
Cast your mind from getting laid
By some boxom wench
'Cos all day long you drive your tank
And night's spent in the billet
You're so damn desperate for a wank.
You know you've got to spill it.

Onward boys, through war infernal
Never mind the damp.
For I am your Lieutenant Colonel
Leader of this camp.
Just come round my tent tonight
You'll need no battle dress
And if you play your cards just right
You'll get the officers' mess.

Defenders Of The Free
Mike

Bang-erty-bangerty-bang
Let's blow up Afghanistan
Ossama Bin Laden
Doesn't give me a hard on
So crap on the stupid old man.

Boomerty-boomerty-boom
Behold the purveyors of doom
We know we can't lose
Because we've got cruise
They'll wish they had not left the womb.

One of the most horrific aspects of war is that, even in peacetime, our children are made to endure the horrors of war poetry. And as an "exercise", they are often made to emulate the war poets they have been callously subjected to in the name of "English Literature".

Here we witness an example of the way a child's mind can be perverted by war poetry.

War is very bad
Oo, it makes me mad
When people go to war.
What's it all for?

War is not that nice
You should think twice
Before doing it
So don't ruin it.

You might think it's fun
To aim and shoot a gun
But if someone did it to you
You'd be dead too.

And people get upset
When one day they get
That letter from the C.O..
Saying their son's six foot below.

So I think it's best
If east and west
Got on with each other
And called each other "Brother".

There always have to be a couple from a woman's perspective, just so later generations can complain about them getting included in anthologies of poems written by people who 'were really there'

Be still, Oh sleeping widow,
Don't wake thee to this sight,
Let thy head rest for awhile,
This cold and heartless night,
For when you wake you'll find it,
The telegram you dread,
That tells you you're a widow,
'cause your husband is now dead.

Be still, Oh sleeping widow,
His picture in your hand,
Your heart is full of hope tonight,
How will you understand?
The man you love, no longer here,
He walks now, free, in heaven,
A moslem shot him through the heart,
With an AK47.

Be still, Oh sleeping widow,
For heartbreak waits outside,
Just 3 sweet months have passed you by,
Since you became his bride,
His soul, it lies at peace now,
His heart lies in God's garden,
And the rest of him's made into stew,
By Mrs O. Bin Laden.

Fire In The Sky
Rachel

The blood and gore and violence
This war it sickens me
And now I'm hiding in a bunker
without a stereo or a T.V.

If this day must be my last
And on to life I no longer cling
All my friend must be assured
I be so bombed on drugs that I won't feel a thing.

Is Anybody There?
Kate

Where are my legs?

Where are my legs?

Can you hear me?

Am I all alone here?